The liquidation of the shipyards in Oslo began in the 1970´s when the owners of Aker Mechanical Industry moved its activities to the Norwegian west coast and during the 1980´s changed the area into a vast commercial development of shops, offices and apartments. Some 25 years later, similar development took place for the outer area, Tjuvholmen (‘The Thief´s Reef’) and these areas are the first completion of ‘The Fiord City’.
Aker Brygge (‘Aker Pier’) is a mix of modern architecture (1980), blended in with old factory buildings from the early 1900. We choose our route along the waterfront, seeing the contrast of the medieval castle, Akershus on the other side of the bay. As we approach Tjuvholmen we see the new art gallery designed by Renzo Piano before finding our way between the new architecture designed by respected Norwegian architects. The plan was ‘hatched out’ by Niels Torp who called his concept ‘Outlook’ and indeed it is, as the space between the buildings open and we see the endless Oslo Fiord ahead of us. 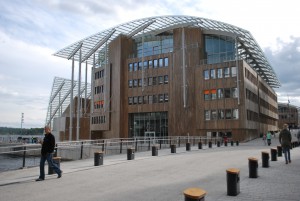