Oslo and the German Occupation

Norway became occupied by the Germans on the 9th April 1940 and remained so until 8th May 1945. During these years of occupation, the Norwegian population put up considerable resistance, a fact noticed internationally by Franlkin D. Roosevelt, for example, who in one of his ‘Firerside Talks’ said; ‘Look to Norway, look to Norway.
The tour takes us through Akerhus Castle where the Germans had their HQ, imprisoned and executed many resistance fighters, and where the collaborator and traitor Vidkun Quisling was shot in October 1945 when the war ended.
Our tour includes a visit to the Civil Resistance Museum.
The photo shows the German HQ Commander Wilhelm Nichterlein handing over the command of Akerhus Castle to the civil resistance fighter, troop leader Terje Rollheim on May 11th 1945. 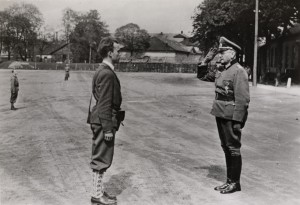